It Is Not Just the Sugar In Soda That Is Making You Fat, It Is the Fizz

Among the most common New Year’s resolutions are getting in shape and losing weight. One way that people are trying to do that is to cut out sugar, especially in soda. Soda is an easy way to cut out sugar. It is completely unnecessary in your diet, and it is very high in sugar, with a typical can of soda having about 150% of your recommended daily consumption of sugar.

But when it comes to trying to lose weight, cutting the sugar in your soda may not be enough: you may have to cut out the fizz, too. 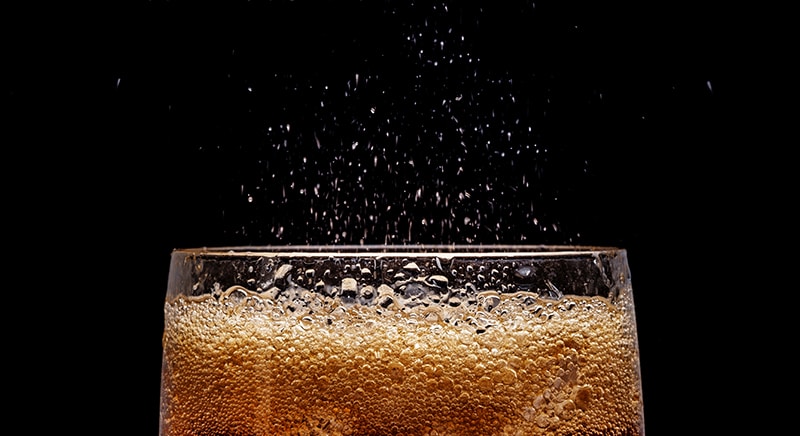 The Fizz Makes You Hungry

The first suggestion of this connection came in September of this year when researchers from Palestine looked at the impact of giving rats a sugary soda, a flat sugary soda, or tap water to drink. They found that those rats who drank the carbonated soda gained weight faster than those that drank tap water–and faster than those that drank the flat soda.

In attempting to explain the data, they looked at a parallel study in which people who drank carbonated soda showed increased levels of the hormone ghrelin.

Ghrelin is sometimes known as the “hunger hormone.” Ghrelin increases your appetite and encourages your body to store more fat.

This is a peer-reviewed study, so it has good information, but it is still preliminary. However, a less formal experiment conducted by BBC doctors seems to support the findings. For their experiment, they gave volunteers a controlled meal, then were given either a carbonated soda, a flat soda, carbonated water, or regular flat water. Researchers took a blood sample to measure ghrelin levels, then people were sent away with a food diary to record what they ate the rest of the day.

Subjects came to the lab a total of four times, and each time they were given a different drink but the same data was collected in a crossover trial design. The doctors found that people who drank carbonated beverages did, indeed, have higher ghrelin levels, by about 50%. These people also consumed an average of 120 more calories a day.

Adding in the amount of calories in a drink, that results in a caloric increase of about 270 calories a day. That means that just drinking one soda a day could lead to a pound of weight gain every 13 days, or about 28 pounds a year of weight gain. Although drinking diet soda does not include calories, it has been documented to lead to weight gain, likely by other mechanisms in addition to carbonation.

The Carbonation Is Bad for Your Teeth, Too

And, of course, weight loss is not the only reason to cut carbonated drinks from your diet. Carbonation can be very bad for your teeth, too. Carbonation in drinks is typically caused by dissolving carbon dioxide in the water. That is the gas that is bubbling out. But when carbon dioxide is dissolved in water, it naturally forms into carbonic acid. This contributes to the acidity in these drinks. In addition, sodas typically contain other acids, such as phosphoric acid or citric acid.

Most sodas are strongly acidic, 100-1000 times stronger than necessary to dissolve tooth enamel. Drinking these sodas frequently during the day keeps your mouth highly acidic for long periods of time, especially if you are sipping slowly. This causes your teeth to dissolve rapidly, and there is little that can be done to stop the process.

The good news is that ceramic dental crowns are resistant to attack by most acids, including those in soda. The bad news is that you would have to restore every single tooth in your mouth to protect them–and that would only work until you experience receding gums, which can also occur due to acid.  It might even get to the point where you would need dentures.

Far better to cut down and then eliminate sodas from your diet altogether.