What do orthodontics and architecture have in common? We’d forgive you if you said that they both seek to achieve long-lasting structural stability, but right now in Clayton, we have a very specific intersection between the two disciplines that we’re focused on.

Currently, the historic Shanley Building (just a five minute walk from our office), is facing demolition. We’ll talk a little bit about why the building is significant, how it relates to orthodontics, and why it’s threatened. 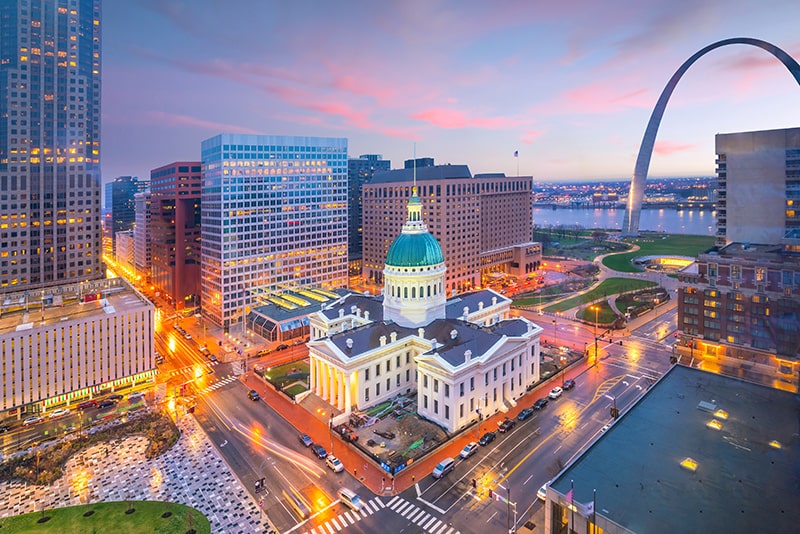 An Exemplar of Modernist Form

The Shanley Building is named after Dr. Leo M. Shanley, an orthodontist who commissioned the building from architect Harris Armstrong.

At the time, Armstrong was a relatively unknown architect. In fact, he was facing a bit of a crisis. He was the son a tobacco salesman, who attended Washington University night school while working as an office boy and draftsman for a local architect. Although he also attended Ohio State University, he gained most of his architectural knowledge by working for many leading firms in New York before deciding to strike out on his own by moving back to St. Louis.

Unfortunately, Armstrong didn’t do so well at first, spending four years in relative obscurity and poverty before he got three commissions in 1934, his first three solo building commissions.

The third of these commissions was Shanley Building, and while the other two got little notice, the Shanley building put Armstrong on the map. The building received extensive write-ups in international publications, and it was featured at the US Pavilion for the 1937 Exposition Internationale des Arts et des Techniques Appliques a la Vie Moderne in Paris, where it was awarded a silver medal.

Armstrong’s fortunes turned around, and he received many important commissions, including one for Drs. Carl F. and Gerti T. Cori, down the road in Glendale. The Coris would go on to win a Nobel Prize for their work on metabolism of carbohydrates.

The Shanley Building was placed on the National Register of Historic Places (as well as the Cori House), and it is commonly recognized as the first example of modernist architecture in the Midwest.

So, what does this building have to do with orthodontics, other than the fact that it was originally built for an orthodontist?

Orthodontics means, literally, straight teeth. It’s part of the genius of the design that its minimalist lines also evoke a beautiful straight smile, especially in the use of small square glass blocks. First, the thin line of blocks over the upper patio alludes to a slight, straight smile. Then the larger panel of glass blocks on the side evokes a much larger smile, not as any realistic representation of teeth, but as the apotheosis of straight orientation: vertical and horizontal. And through its numerous other squares overlapping and embedded, it almost evokes the way that traditional braces created an image of squares within squares. Neither Dr. Shanley or Armstrong could probably have imagined that we would one day use orthodontic approaches like Invisalign that utilize clear plastic aligners instead of wires and brackets. However, the principles of cleanness and order that the building represents still link with the goals of modern orthodontics.

But perhaps the most important link is the way it established dentistry as a forward-looking discipline. The use of modernist architecture for this custom building associated dentistry with futuristic technology, a value we still embrace today at City Smiles, where state-of-the-art technology lets us deliver care that couldn’t be found outside science-fiction pulps at the time the Shanley Building was built.

The Threat to This Historic Building

However, the building could be lost to development in the near future. It would have to go for a $275 million development, with the two primary buildings being a condominium and a hotel, planned by the HBE Corporation. It would be. Speaking about the project to the St. Louis Post-Dispatch, consultant Stafford Manion who was working on the project said, “The development will be something that the city of Clayton and the county of St. Louis and the general area can be very proud of.” However, he also conceded, “There’s currently just an abundance of apartment towers in the city of Clayton,” including the recently-opened building at 212 South Meramec, also owned by HBE.

The development project is meeting some resistance from locals who want to preserve the Shanley Building. With petitions and social media campaigns in action, we will have to see how HBE and the city of Clayton decide to respond.